BUCK: What I think is the root fallacy of Fauciism, is at every stage when they want to do something they pretend that it’s just “the science” and that any reasonable person would see it this way. Even when we look back at how they were making the same claim about a month or two months ago, and they were wrong, right?

There’s a great clip now circulating of Fauci basically saying the vaccine is a miracle that’s gonna end this thing and it’s 95% and it’s incredible to, month to month, to where we are now, where, I mean, how effective is the Johnson & Johnson vaccine after six months? You look at this data and you say, “How could they have gotten this stuff so wrong and still pretend that they’re infallible now on these judgments?”

CLAY: Well, and pointing to that, the Today show is about as unthreatening of a television broadcast as exists in America, by which I mean if you are sitting down and the Today show is pointing out the fallacies of your arguments, we’ve crossed the proverbial Rubicon in terms of Fauci is the emperor wearing no clothes, right? I want you to listen to this. We talked about it. Fauci, remember, went on with Joy Reid on MSNBC, among others. He also went on CNN of course. Can’t come on this show. Doesn’t have time to do it.

But he went on those shows and said as college football season started that he was terrified that covid was going to “feast” on these packed stadiums all over the country, hundreds of thousands of people, millions of people every weekend now going to college football and NFL stadiums. And what’s happened? Cases have plummeted down. Listen to the Today show ridiculing Fauci and his predictions about the dangers of football.

SHAQUILLE BREWSTER: Doctors warned of games becoming potential super-spread events, but it never happened. Covid cases, hospitalizations, and deaths now all down nationwide. Cases are now in steep decline in every college football state across the South — including Florida, where hospitalizations fell 64% last month, even as some 90,000 fans packed the Gator stadium.

Dr. CINDY PRINZ:  You see it on TV, and it looks really scary ’cause we’re not used to seeing that anymore. But in reality, I think, the exposure isn’t as great as we think it is.

BREWSTER: Doctors crediting games in open-air venues, a vaccination pump during the surge, and natural immunity after Delta swept through younger populations.

CLAY: So that is that report. And, by the way, if we could go back and grab Fauci, ’cause right at the beginning of that report, we didn’t play that cut, but Fauci is on Joy Reid saying that he believes covid will be feasting on all of these fans. And, Buck, this is a storyline and narrative that I actually think we can take some credit for on this show, because we pushed back against the idea that this was gonna be an incredible danger.

And now even the Today show, which is not exactly a right-wing publication — and certainly is one of, like I said, the least threatening and least forward thinking of all media outlets — is out here saying, “Hey, ‘the experts,'” in quotation marks, “got it completely wrong as it persons to these big events outdoors.”

BUCK: I gotta tell you, Clay, I have a friend who’s a brilliant lawyer who came up to me over the weekend, someone I’ve known a very long time, and he just said, “Look, I’m not somebody who’s really always agreed with your politics, but I followed your work and I’ve followed Clay’s work — and on covid, you guys have been right so many times, when I wasn’t sure I was gonna shake out or it seemed like you’d have to be wrong.” 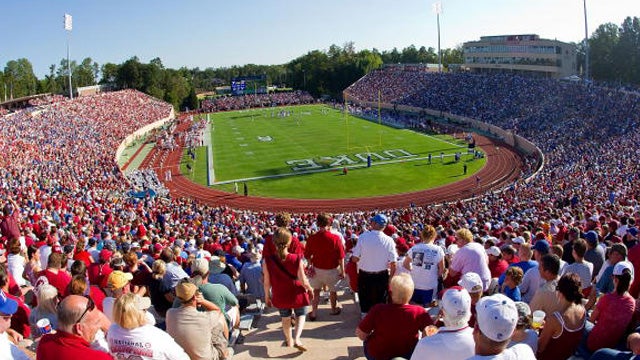 And he says that this show has become essential listening for him because — and he’s right. We know this. There’s so few places. How many places, when Fauci was running around saying that the spread at these college football games was going to be a super-spreader — after they had had the huge concert in Chicago over the summer, the Lollapalooza, after they’d done this stuff!

He clearly picks and chooses his targets based on politics, folks. Let’s just be very honest about this. Who gets shamed and who gets a pass in Fauci’s world is whether or not they’re part of the apparatus, whether they’re a Democrat, whether they’re in good standing with the people who were the elites. That’s it, and you and I said this.

There are other places that do it, but there are not that many and there certainly aren’t that many that have this level of reach. And this is, once again, a moment where we’re right. How many times have we been saying — and I appreciate that everyone who listens to us is essentially voting in favor of the truth by listening. How many times did we say in July and August when things were looking really rough in Florida, “Look, it’s seasonal; it’s going to move. It’s just looking at the data,” and now we’re supposed to pretend that Fauci’s sudden backpedaling on all of this stuff is —

BUCK: — the result of the numbers right, when we’re about to go into the winter, or the result of his Democrat overlords saying, “You’re starting to become a little bit of a liability to us, and we’re going into a midterm election”? They know. They know what this is gonna look like for them if it continues.

CLAY: Team Sanity is winning, and that is starting to drive people crazy. I watched a bunch of stuff over the weekend. Fauci now is coming out… Did you see Fauci, like, endorsing every holiday? I thought he was gonna be telling people they need to make sure they’re gonna be celebrating Kwanzaa in as big a crowds as they possibly can. He’s saying, “Hey, everybody needs to trick-or-treating! Everybody needs to be hanging out with their family is the Thanksgiving, Christmas.

BUCK: (impression) “National Sock Day, National Puppy and Chocolate Cake Day. Be out there in the biggest crowds you can be in!” It’s a big change from a couple weeks ago, and he’s saying, “I don’t know if Christmas happens this year, folks. I don’t know.” You remember that?

CLAY: Yeah, a hundred percent, and then he backpedaled and said immediately, “Everybody can go out trick-or-treating ’cause it’s not a big threat,” and, oh, by the way, we got a major story. If you want to have some fun with this, unfortunately, we got a major obesity issue. People are under more danger every day from obesity than they have been from covid, especially if you’re under the age of, like, 60, right? We have so many fat people out there. Can’t even say that now. But everybody going out and getting more chocolate, get more candy, eating it all up? Does that scare you? Is that fat shaming? Have I terrified the masses there?

CLAY: But it is like Team Sanity is winning in a big way, and when I saw that story come out from the Today show and I appreciate, by the way, all of the listeners out there, when you guys see this stuff, sending it to us can make a big difference. I got open DMs, you know, if you see a story that you want us to see, I don’t keep up with mentions, things like that.

But as soon as I saw the Today show, I really thought, “Man, we are making a big difference in the way that we are talking, and even other media are starting to follow our lead.” Here, by the way, the Joy Reid and Fauci bite, which was included… I thought this was interesting… It was included in the Today show report. Listen to Joy Reid and Dr. Fauci talking about how terrifying everything is gonna be from covid.

REID: As soon as I saw it, I thought, “Covid’s about to have a feast.” What did you think?

FAUCI: I thought the same thing. I think it’s really unfortunate. I would hope that most of the people in that stadium were vaccinated. And if they were, the close congregate setting, they should have been wearing masks.

CLAY: So that was Fauci talking about the crowds. I just wanted to add that, because that’s him directly addressing the college football crowds and what he’s anticipating is gonna happen.

BUCK: And there was no feast for covid at the college football games. What a shock.

CLAY: No feast at all.